“The Optimism of Youth” at 24 Hour Creative 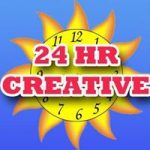 24 Hour Creative is a creative challenge put on every year at Camino Real Playhouse in San Juan Capistrano, California. Six writers, six directors, and 30+ actors create six ten minute plays, all within 24 hours. Writers are given a theme at 8PM on Friday, actor auditions are held, and writers write all night to create a stage play. Directors take the scripts and turn them into produced plays with the actors rehearsing all day. At 8PM that night, the show goes on.

This was my seventh stage play on stage, and my fourth year doing 24 Hour Creative. The co-founder and producer, Jennifer Hartline, puts on a spectacular show every year, and this year was my favorite. Each year we remember the show’s co-founder, Bruce Alexander, who we miss dearly. The professional quality is second to none, and to do all this in 24 hours is quite impressive.

This year’s theme was “realistic vs. unrealistic optimism.”

My play, “The Optimism of Youth,” was brilliantly directed by Arash Aiinehsazian, and our stars, Sabrina Paris (Jennifer), Matthew Carter (Hack Thespian), Taite Morrison (Ink Slinger), Erika Maggipinto (Mythmaker Word Smith), and Zara Melikyan (Gogh Between). A playwright can write a bad play, but only the director and actors can make a good script great. And, they did.

Corey Eib creates exceptional videos as part of the social media campaign. Check his work out on Facebook. Just search for 24 Hour Creative to see photos and videos about the performances.

24 Hour Creative will be back, better than ever, in 2019. If you’re in the area, you should make plans to come see creativity at its challenging best. 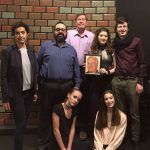 The director and cast of “The Optimism of Youth,” performed at 24 Hour Creative

You have Successfully Subscribed!